Welcome to the IGO Watch Monthly Update for March!

We hope you are staying safe in this difficult time.

The Coronavirus has rapidly spread throughout the world infecting more than 700,000 people and led to the deaths of more than 35,000.  At the center of the pandemic is the World Health Organization (WHO) that has rightly received a deluge of criticism for its handling of the novel Coronavirus outbreak and coddling of the Chinese authorities. The frustration has reached such a fevered pitch that more than 670,000 people signed a petition calling for WHO Director-General Dr Tedros Adhanom to resign. The scandalous connections and allegations of corruption between the top management of the WHO and the Chinese Communist Party (CCP) are now on full display.

As a preliminary response to the emerging crisis, the Chinese government resorted to a cover-up by imprisoning and silencing doctors, journalists, and whistleblowers who tried to warn the public about the coronavirus. One of the first people to warn the world was the late Chinese ophthalmologist Li Wenliang who told his medical colleagues in December about cases that seemed suspiciously similar to the 2002 SARS outbreak. The Chinese authorities swiftly censored all information about the Coronavirus outbreak on social media and suppressed all news stories that exposed the dire circumstances in the city of Wuhan, the epicenter of the outbreak. Dr. Wenliang and his colleagues were forced by Chinese authorities to renounce their warnings and apologize for disturbing the peace.

Despite the ongoing cover-up and warning signs from the international community, the WHO didn’t hesitate to praise the CCP for its “transparency” and “leadership.” What came as another shock was the WHO’s refusal to declare a public health emergency in mid-January. In addition, the WHO was barred by the CCP from sending an advance party into China until February 10. Despite this behavior, the Director-General of the WHO went so far as to personally commends Xi Jinping’s “political commitment” and “political leadership” in dealing with coronavirus cases. 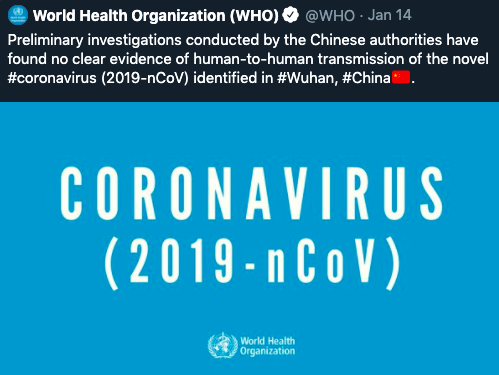 Serious doubts have proliferated about the WHO’s ability to prioritize the health of the general public over playing nice with dictators. The organization didn’t even allow Taiwan, an affected country, to attend the emergency meeting because of political pressure by the Chinese authorities.

Despite having already faced significant criticism for their assessment of the threat of the Coronavirus outbreak, the WHO was apparently more concerned with appeasing the Chinese government than the underlying public health risks. Another dubious decision sparked substantial criticism when the WHO was quick to defend the inaccurate and nontransparent actions of China, rendering scores of soon-to-be affected countries unprepared and unaware of the level of the upcoming threat.

The end result of the WHO’s charade and politicizing could be counted in tens of thousands of preventable deaths due to false information about the scale of the threat in what has turned out to be a global pandemic.

The answer lies in the corrupt, ineffectual leadership of Director-General Tedros Adhanom Ghebreyesus. The former Minister for Health of Ethiopia’s rise to the position of WHO Director-General was a direct result of intense CCP lobbying as part of their strategy to spread their international influence through international organizations in order to “reshape the international system to accommodate its political and economic interests” using all available (legal and illegal) means.

Because of already established political and economic relations between Ethiopia and China (as well as both regimes’ affinity towards gross human rights abuses), Dr. Tedros was an ideal candidate. This level of Chinese influence over Ethiopia ensured the continuous support of the WHO’s leading man who didn’t hesitate to start his tenure by showing support for China’s claim over Taiwan and appointing notorious dictator Robert Mugabe as a goodwill ambassador. This type of support was and continues to be financially awarded through various projects and infrastructure investments facilitated by China. Taxpayers Protection Alliance Executive Director Tim Andrews wrote this article on the money trail behind Dr Tedros and the Chinese Communist Party. If you need more proof, just take a look at a recent interview featuring WHO assistant director-general Bruce Aylward, who repeatedly praised China’s leadership during the outbreak but couldn’t even publicly acknowledge Taiwan’s existence. Aylward suddenly ended the video interview after the RTHK journalist asked him about Taiwan’s admission in the WHO General Assembly.

Despite CCP’s persistent influence at the very top of the WHO, billions of taxpayer dollars from around the world still flow to the WHO every year. Instead of financing epic ineptitude and shady dealings, we must demand urgent reforms! Let’s stop failure and corruption within the WHO!

Prefer video over reading? You can watch our Monthly Update in video format. Check it out on this link!

See Something? Say Something!

We’re always looking for regional coordinators from countries around the world to help us distribute information on social media, write blog posts and op-eds, and provide us with on-the-ground information from their region.

If you have any tips about stories, or would like to become a regional coordinator, please send us an email at this address!